As announced earlier on our blog, we are releasing the complete build environment for Fairphone OS on Fairphone 2. This contains the full open source code, all the tools and the binary blobs that will allow users to build their own Fairphone OS.

Fairphone is eager to create a path for developers to contribute to the software of the Fairphone 2, and we want to engage with the community so they can help us improve on our core values of longevity and transparency. We also want Fairphone 2 owners to feel that they can open up and control their software. The open source version of Fairphone OS will allow more flexibility to the user, for instance allowing them to root their phone while remaining focused on a pleasant user experience that is provided by our version of Android.

Fairphone 2 comes preinstalled with Fairphone OS, which is based on Android, a mobile operating system developed by Google and the Open Handset Alliance. Android’s source code is released under open source licenses, but that does not mean Fairphone OS is fully open source. Let’s take a closer look at the Fairphone OS software stack. 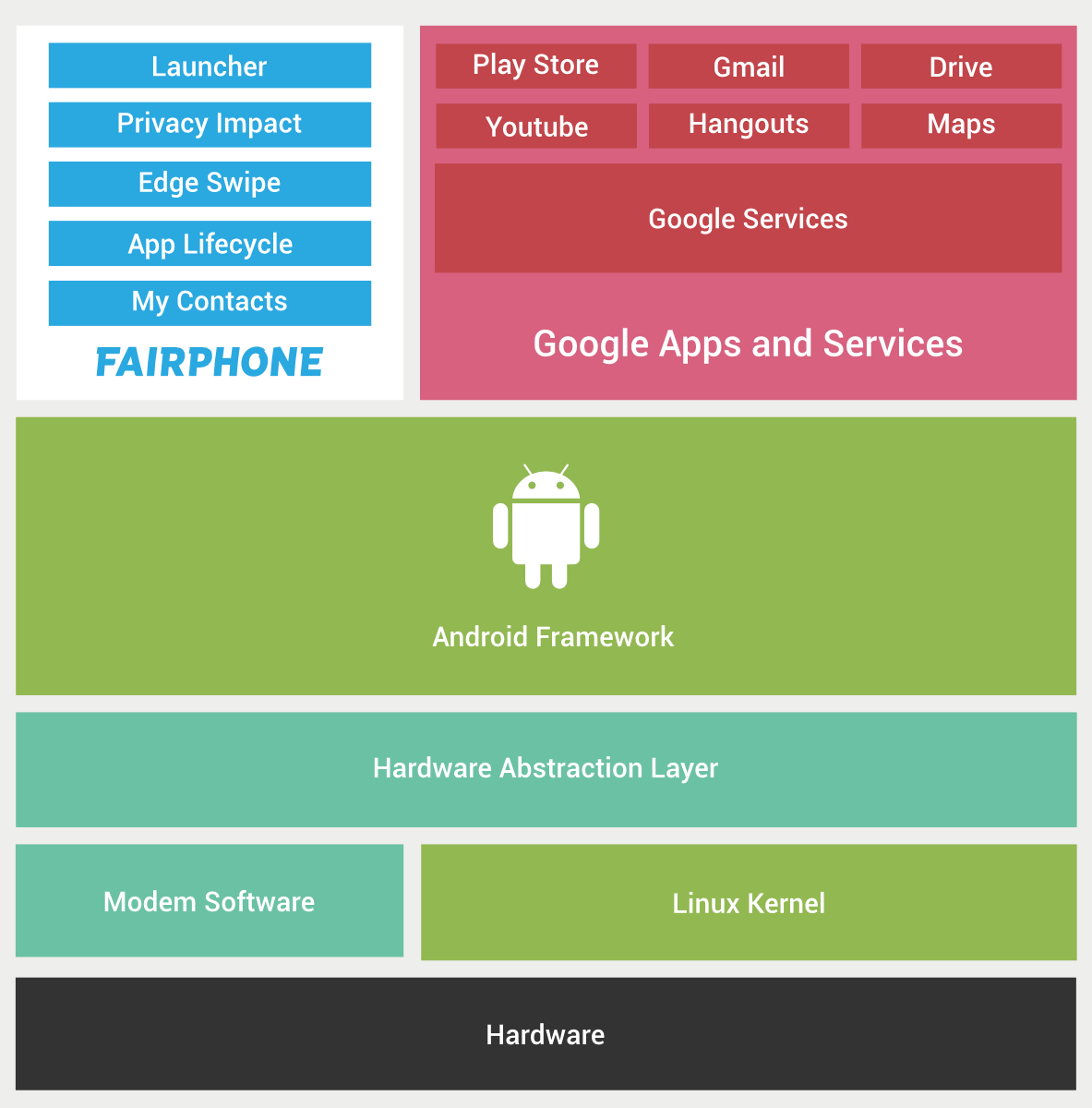 Fairphone OS consists of several layers. Let’s start at the bottom: the hardware. Fairphone 2 is a sophisticated piece of technology that is comprised of many components. Android needs to know how to communicate with these components, and therefore so-called drivers are needed. These drivers often come in the form of binary blobs, which do not have publicly available source code. But at least they get the operating system running!

But there’s more. In its current form, Android is not really usable yet. An application store is still missing, for example. Therefore nearly every Android phone on the market is shipped with Google Mobile Services (GMS). This is a package of Google apps and services, including the Google Play app store. GMS is distinct from Android and remains under a completely separate license from Google, and is not open source.

Besides that, most phone manufacturers include their own flavour on top of Android. This flavour usually consists of a different user interface theme and some pre-installed apps. In case of Fairphone, this flavour consists of a custom launcher, Privacy Impact, Edge Swipe, the App Lifecycle and My Contacts widgets and some wallpapers.

Fairphone Open is an alternative, open source version of Fairphone OS, built by Fairphone, that puts transparency and ownership in the spotlight. It comes stripped from proprietary applications (like the Google Mobile Services) and can be modified by people who feel like doing so.

The Fairphone Open edition is a pure Android experience, without the integrated Google Mobile Services (Google apps, Play store, etc.). Once you run our open source version of the software and you would like to install third party applications, there are several easy ways to do this. There is a topic on our forum discussing various alternatives to the Google Play store.

Apart from bringing a Google-free experience with our open source version, we also make the code available for the unique Fairphone features integrated in Fairphone OS.

What does this mean for me?¶

Don’t worry, you don’t have to be a software developer to make use of Fairphone Open. To set the example, we will soon release a build of the open source code for you to install. We will do so regularly to incorporate updates and security fixes.